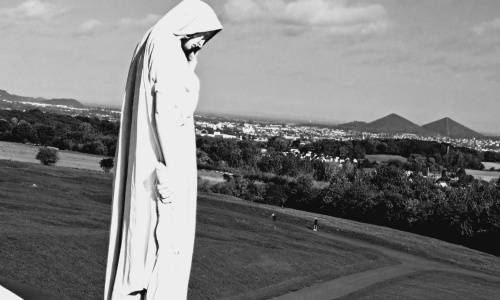 In Flanders fields the poppies blow....

Our trip to the Battlefields began with an epic journey to France. We boarded the coach at 11:30 and we were soon off to catch the Euro train over to France, it took just 35minutes, and we arrived to beautiful blue skies. Our first stop was to the most impressive memorial at Vimmy Ridge which stands majestically and can be seen for miles around. The sculpture captures the depth of the grief of a nation with the main figure showed downturned and weighed down by the loss of the Canadian troops across the battlefields we walked though.

Then we headed to Belgium, quickly visiting the biggest crater created at Lochnagar. It was a whopping 300ft across and 90ft deep but showed us just how important artillery was in the fighting. Our driver safely deposited us at the hotel and we had time to eat, unwind and catch up on some sleep.

Our second day was jam packed with visits. Our first was to Beaumont Hammel which gives you a moving and realistic idea of what the fighting must have been like, thanks to a remarkably well-preserved system of trenches. The park is huge and in the centre is a mound with a statue of a caribou, the emblem of the Royal Newfoundland Regiment. Next, we travelled to Ypres (Iper) and we were able to visit the museum which is housed in the huge Gothic cloth market from 1304. It was destroyed in WW1 and reconstructed complete with 70m belfry.

Then after lunch, and shopping it was time to head for Essex farm to see how the soldiers were looked after when they were injured. It was here that the famous Canadian Medical Officer John McCrae served and wrote one of the war's most well-known poem, 'In Flanders Fields' in 1915. McCrae's friend and patient Lt. Alexis Helmer was killed by a direct hit from an 8in shell (and is buried in the cemetery) and he was moved to write his famous words:

"In Flanders fields the poppies blow

Between the crosses, row on row,

That mark our place."

Our next stop was Tyne Cot cemetery which is the resting place of over 11,000 buried and remembered with stark white headstones. On the back wall the names of 34,927 men are carved who have no known grave. This makes you stop and consider the scale and impact WW1 must have had on whole villages, families and communities. The names of the men are continued on the high walls of Menin Gate. We ended our day listening to the last stand which is played every day of the year at 8pm to pay respects for those lost from around the world.

On our final day, we headed home, but we were able to visit a few sites before we left. The German cemetery was an incredible contrast to the commonwealth graves we had visited. It was dark and stark and the huge mass grave really forced you to think about the way we remember our dead and how the ‘victors’ consider the past against the nation made to take responsibility for the war. Our final stop before we headed for the crossing was our stop at the place that men who were shot at dawn for cowardice or desertion took place. Learning how so many were suffering from what we would consider as PTSD now showed how little understanding there was to a war that was being fought like no other prior to it.