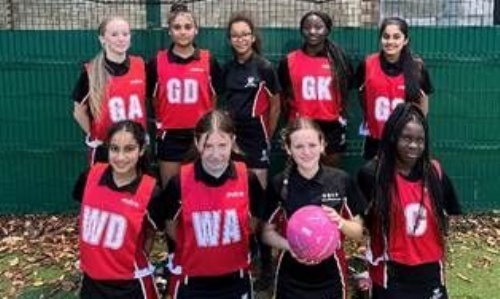 For the first Year 8 fixture of the year, the team came together fantastically well...

A 6-3 win over North Cestrian saw the team claim their first win, with Alyssa Knight (captain) being named player of the match. The team then moved onto playing the hosts, Blessed Thomas Holford, who proved to be stiff competition. The game ended in a 1-0 loss with outstanding defending from Rinmi Awosina, who was also named player the match. The third game against Urmston Grammar was a game of 2 fantastic halves and it could have gone either way. After being behind 2-1 at half time, we came back to draw a 3-3, with Rinmi Awosina this time at the shooting end, taking player of the match. The last fixture of the day saw the team face Altrincham College and a strong finish it was too with a convincing 3-0 victory. Princess Bolu Cole this time was the nominated player of the match. The support shown from and to each other was great to see and the team showed they were a force to be reckoned with.