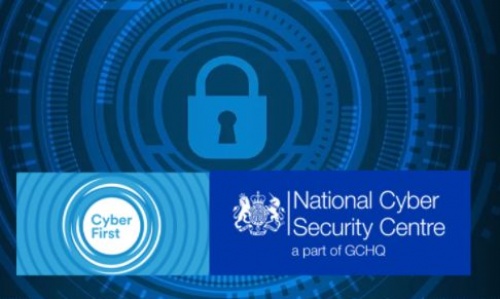 After their journey to the UK finals of the National Cyber Security Centre’s CyberFirst Girls competition in Cardiff in 2020, our team of four cybersecurity experts, Aisha, Alice, Erin, and Amanda recently headed off on one more trip, this time hosted by the McLaren Technology Centre in Surrey.

The day began with speeches from some interesting and inspiring individuals, along with some reminders that our team of four bested 18,000 others to get to where they were, and that there are still many opportunities for them in the future. The talks included government agents describe how they  manage a team tasked with securing the software on nuclear-powered aircraft carriers, CEOs describing how they went from maths, to accounting, to running a business writing artificial intelligence programs to detect and prevent network intrusions, and a McLaren engineer building the latest automotive technologies.

After this there were some team-based challenges, with our students working alongside other schools to solve some puzzles and decode a challenge, followed by a tour of the McLaren technology centre, where mechanical, electrical, and software engineers are developing state-of-the art vehicles. Many fans of Formula 1 would have loved to see the myriad of F1 cars, super cars, and trophies on display, but this experience isn’t open to the public, so our students got a peek at something quite extraordinary.

After a nice afternoon tea and a few final works and reminders of what talent our students have, and where it could lead them in the future, we headed back, ready for the next set of CyberFirst challenges and ready to help and inspire the next set of students back at school.