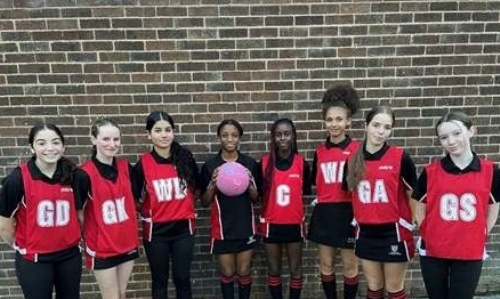 This week saw our Year 9A team take to the netball courts in some rather testing conditions, captained by Kayne Muhumuza. The first game was against Ashton on Mersey which was a close game throughout. Both teams demonstrated some great netball skills but AOM pipped us right at the end to a 3-2 win. Our second game against Urmston Grammar again was a close contest but saw us come out 3-2 winners. Moving onto BTH for our last game of the day, the first half of the game saw us 2-0 down but we came back to 3-3 in the second half. Stand out players of the day were Lana Zabadne, who played both C and GD, Lorena Prokop-Sanchez, who showed much more confidence in the GA position throughout each game and Ruby Bryan, who impressed me with her versatility and improvement on the court.

The Year 8 Boys Rugby Union team co-captained by Jonny Fernandez Arias and Finn Hughes travelled to Trafford Metrovicks RUFCC for the Trafford Emerging Rugby Schools Tournament. They began the set of games showing fast attack to beat Sale Grammar 3 tries to 1. Try scorers included Sami Ahmed, Fikemi Abati and Ben Cooke. A strong squad of 11 boys from Wellington School then went on to beat us 3-0;  better racking would have built a platform for more success. Finally, the last game was called off at half time due to rain; the boys drew with no points scored against BTH. Fearsome defence and rule understanding helped us to prevent their larger ball carriers breaking through our defensive line. Player of the Match deservedly went to one of our captains, Jonny Fernandez Arias for his excellent counter attacking and bravery throughout ruck's. Finally, it was great to see debutants such as Aariz Khalil, Ahmed Bashir and Benjamin Hosford take to the field.