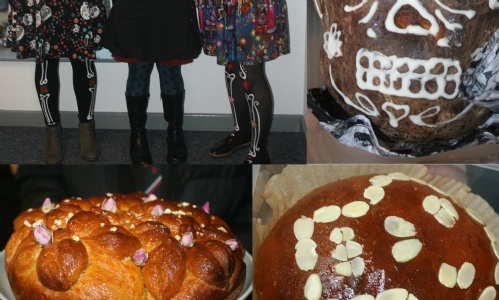 Every year our students take part in activities for Dia de los Muertos and this year is no exception. During a great bake off competition, our students and their offerings were judged by an expert panel of cake lovers - Miss Khadem, Mr Ochman and Miss Eeles. The competition was fierce with the eventual winners being:

Sofia spent the rest of the day proudly wearing her Star Baker apron!

The traditional bread of the dead (pan de muerto) is similar in texture to challah (a ceremonial Jewish bread) and sprinkled with sugar or sesame seeds — it is a staple of the Mexican holiday Dia de los Muertos, or the Day of the Dead. The celebration aims to reunite the souls of the dead with the living. It’s a symbol of their death, but at the same time, life. People eat the bread with their families, but it is also an essential offering on home altars, or ofrendas. The sweet-smelling bread sits alongside photos of the dead, and an array of their favourite foods and drinks, attracting and nourishing the souls who visit!

Our students did a fantastic job of recreating their version of the celebrated traditional bread. The judges certainly thought so!  Well done to everyone involved.