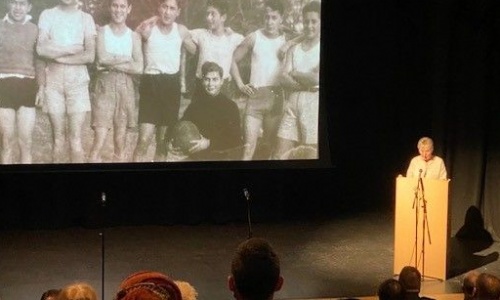 Joining a wide variety of students from other schools in Trafford our students learnt and remembered the events of the Holocaust as well as genocides since then including in Rwanda and Srebrienica.  The memorial was led by the Mayor of Trafford and members of the communities affected by the Holocaust.  Students heard the testimony of a child of a Windermere Boy who had settled into the Lake District after fleeing Nazi occupation before establishing a new life in the North West of England.  Speaking of her father, she mentioned the importance of refugees having a safe place to live without fear and how important the support her father received had been central to her work in remembering the Holocaust.  As the number of Holocaust survivors becomes smaller every year we heard the recorded testimony of a survivor of the Polish Ghetto and of Auschwitz.  He recalled in his personal testimony how he had lost one side of his family in the concentration camps and how he hoped people would never forget what had happened.  Students took part in the act of remembrance, led by the cantor of the South Manchester synagogue before witnessing the lighting of candles of remembrance for the Jewish survivors of the Holocaust, for the other groups targeted who were part of the Holocaust and for those of other genocides.  The memorial ended with a dance of remembrance from the gypsy community who also lost many members during World War 2.